Climate and weather in Austria

The diverse landscape of Austria directly affects its climate. In the east of the country, the winds are not uncommon; in the Alpine foothills the influence of the continent with lower temperatures in winter and higher in summer is felt. More precipitation falls from the northern side of the Alps, and the climate is temperate, usually without significant temperature differences. Central Austria is located on a hill. In the valley of the Danube, surrounded by hills, its mild microclimate is formed, favorable for winemaking and growing fruit crops. In the south of the Alps, the influence of the Mediterranean Sea is felt; mild winters and many sunny days are characteristic.

Salzburg is located on the northern edge of Austria, north of the Alps. 70% of the land of Salzburg is mountainous. Due to the difference in heights, the air temperature can vary significantly in the city and the nearest suburb, especially in autumn and winter. According to statistics, cloudy and sunny days are equal here. A temperate climate prevails. Each season has its own three months.

In Salzburg, November and the first half of December often delight with sunny days; the temperature is usually +5 +10. However, by mid-December, it gets colder sharply. Forecasters call this period the "Christmas depression"; when temperatures drop below zero, the ground has cooled down enough, and snow falling in the valleys does not immediately melt. The temperature ranges between 0 and -5 degrees. 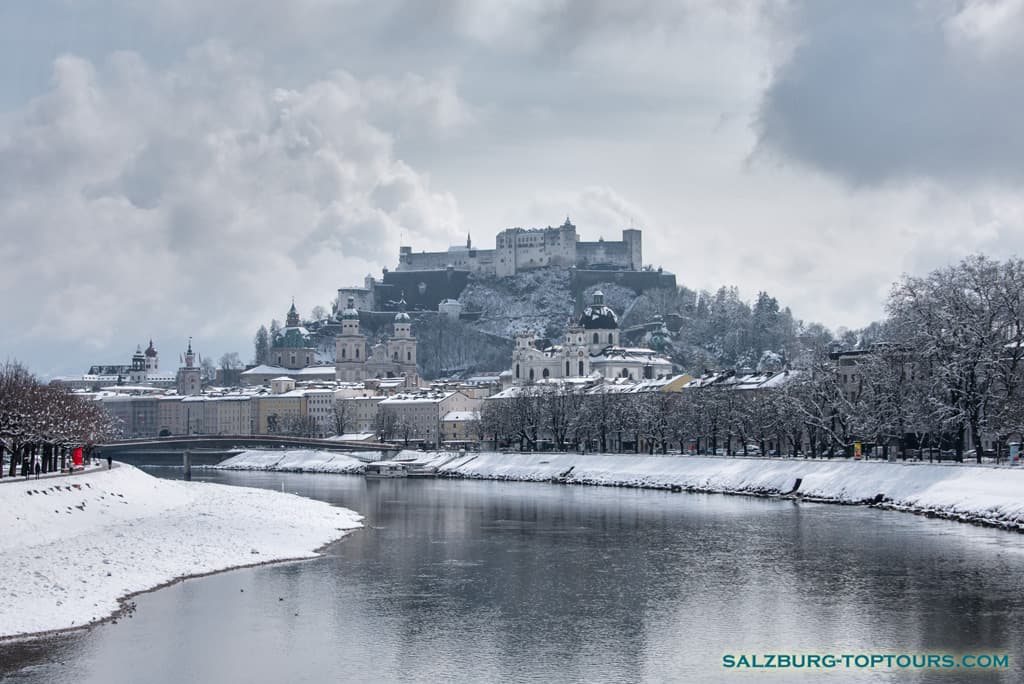 From the first week of January, a real winter comes with heavy snowfalls and low temperatures. Statistics show that frigid winters happen in Austria once in 10 years. For example, this was the case in 2006 and 2017, when the temperature dropped to -25 degrees. At the same time, large bodies of water freeze entirely, which rarely happens nowadays.

Several times during the winter, a warm anticyclone Föhn comes to Austria from the south. With it, a hurricane-force wind begins to blow and the temperature can jump up to +15 degrees during the day. Due to strong winds, all lifts are stopped in ski resorts for safety reasons. After 2 - 3 days, the cyclone leaves, and temperatures return to subzero levels again. 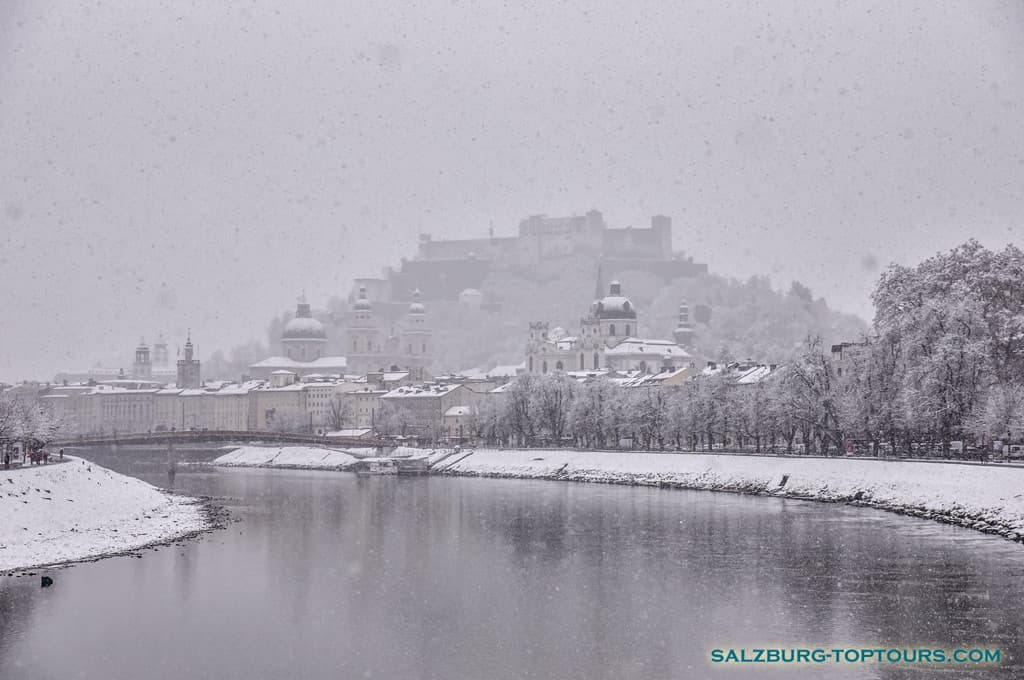 Traveling to Salzburg from a ski resort, do not forget that Austria is not the south. It can be freezing here with high humidity! In Salzburg, the cold feels damp, penetrating to the very bones. To explore the city center, you will have to walk. In the afternoon, the shadow of the Menchsberg mountain covers the entire area of the old town, and if you are not warmly dressed enough, the tour will be reduced to one shopping trip and a cafe. Dress as warmly as possible! Let it be hot rather than cold.

February in Salzburg is often cloudy; heavy snowfalls are not uncommon. Heavy humid air settles in the valley of the Salzach River. But, having left the valley for the mountains, the clouds remain behind and a clear blue sky with a bright sun opens above you. 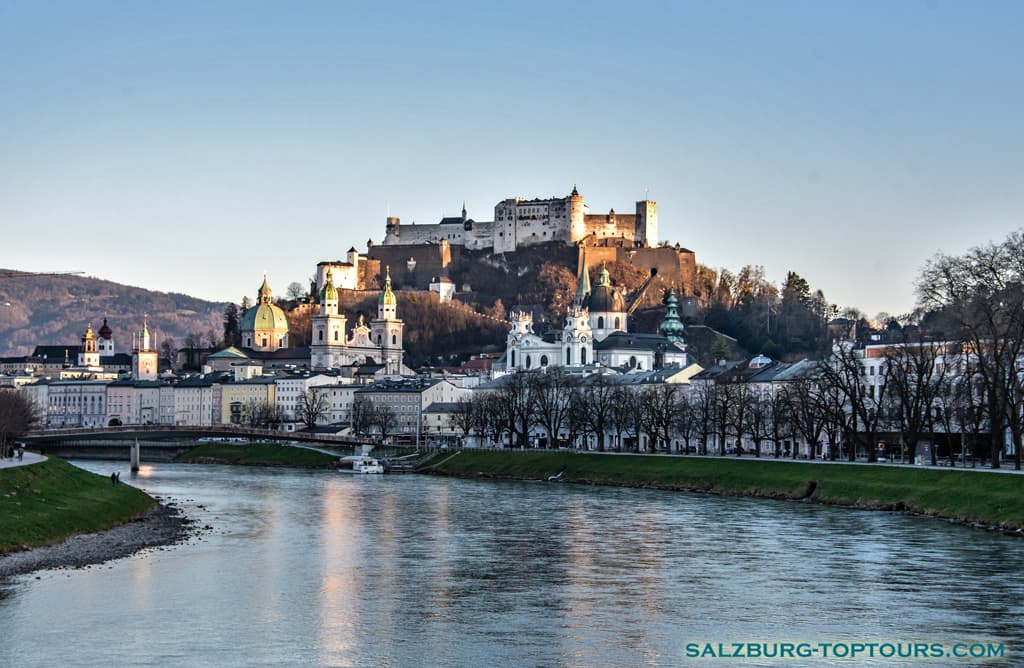 Thaws begin in March. There is still abundant snow in the mountains, while the grass begins to turn green in the valleys and the first flowers bloom in the parks. The average temperature in March is +5 +8. March usually pleases with stable temperatures and rare precipitation. By the end of March, the air temperature may rise to +20. At this time, magnolias begin to bloom in Salzburg.

April, like everywhere else, is a month with changeable weather. After warm sunny days, when you have already put most warm clothes in the back drawer, winter is coming back again. Heavy snowfalls with snowdrifts in April are not uncommon. No wonder the local saying says: April macht was er will - April does what she wants. 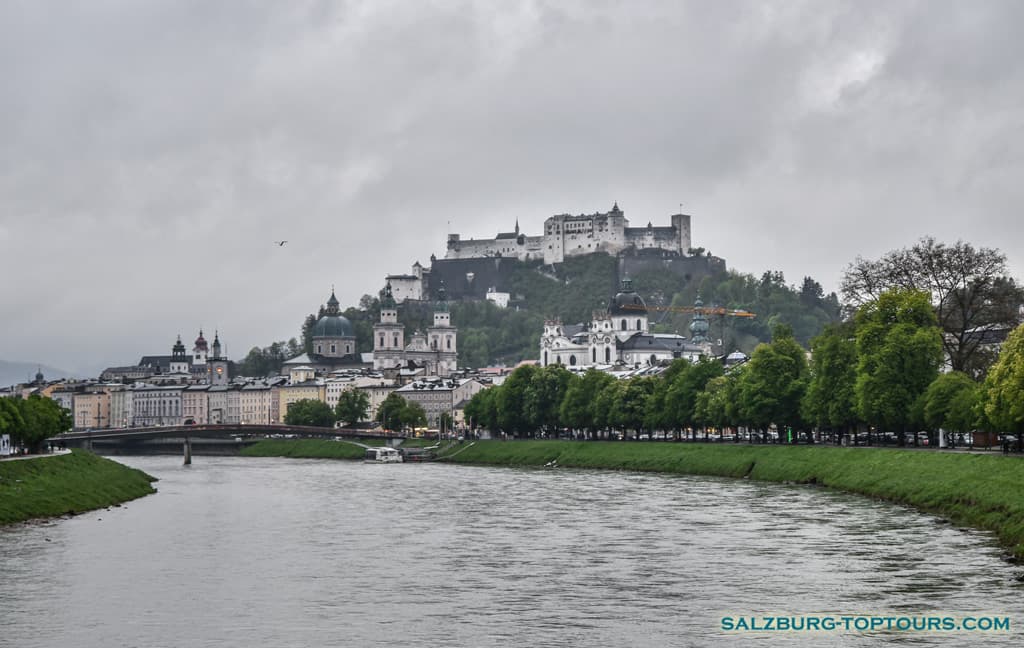 The weather frequently changes until mid-May. It is usually warm, but it often snows in the mountains when the weather deteriorates. Only after May 15 can we talk about the temperature stabilization and the arrival of summer. There is a sign that it is not worth planting heat-loving crops until the days of the five ice saints since frosts on the soil occur almost every year until St. Sophia's Day (May 15). There is even a local saying: Di koite Sophi mocht ois hi, that is, Cold Sofia ruins everything. In 2017, for example, snow fell in the mountains until mid-May. The temperature from the second half of May to the beginning of August ranges from +20 to +30 degrees. 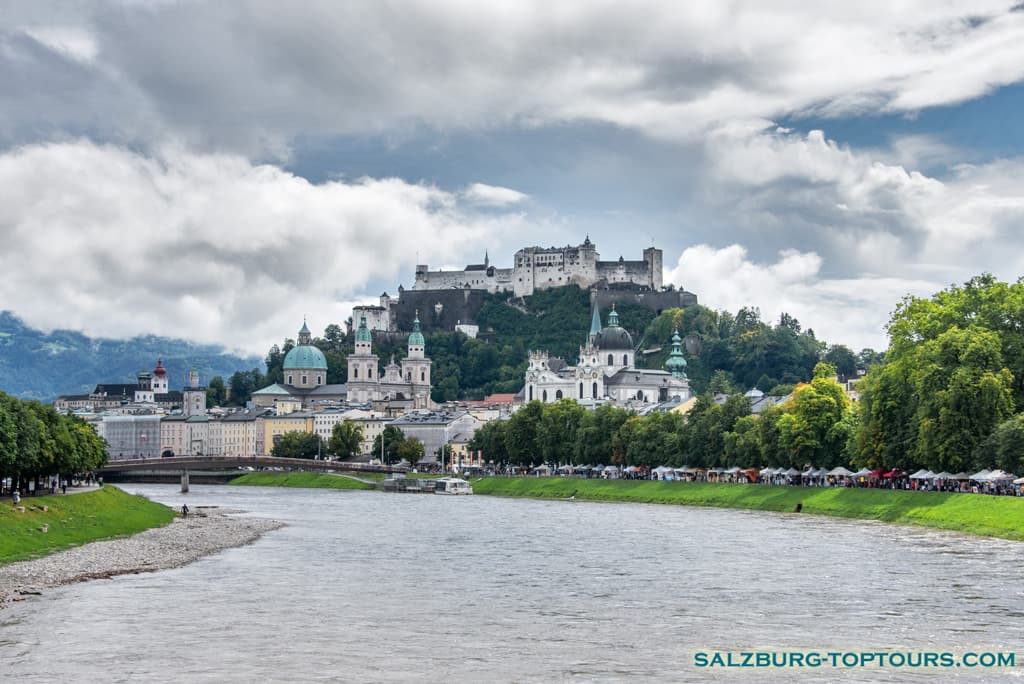 In June and July, hot weather sets up to +35 and heavy showers in the evenings and at night.I always advise my guests to take warm clothes and waterproof outerwear with them when traveling to Austria, even in summer. Jackets (windbreakers) and sturdy shoes are handy if you spend time actively climbing the mountains. Heavy rains are a frequent phenomenon in Salzburg. At the same time, it becomes pretty cool in the mountainous area. 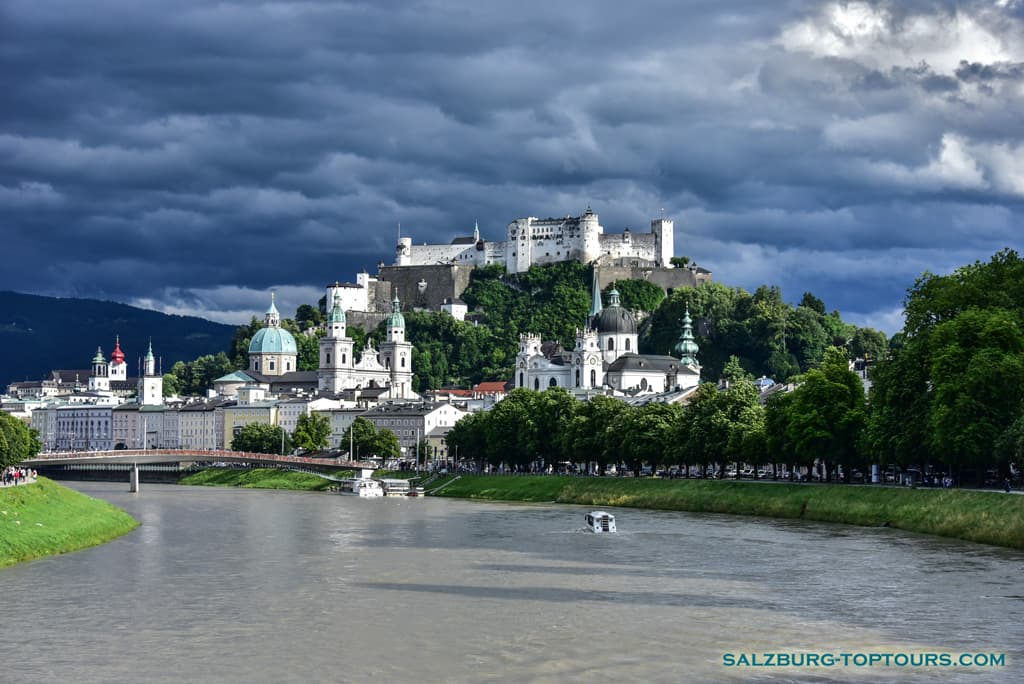 August is still a warm summer, but it's starting to rain more and more often. The temperature during the day is +25 +27 and at night +10 + 15. In early September, warm, dry weather prevails. But nature seems to be holding a calendar in her hands, and as soon as September 1 comes, the breath of autumn begins to be felt. The sun is shining brightly, but it warms less. Until the beginning of October, comfortable temperatures are usually in the daytime: +20 + 23 degrees. Then, the nights become cool; the temperature is +7 +10 degrees. Indian summer, which lasts until mid-October, is a great time for a trip to the Alpine region. 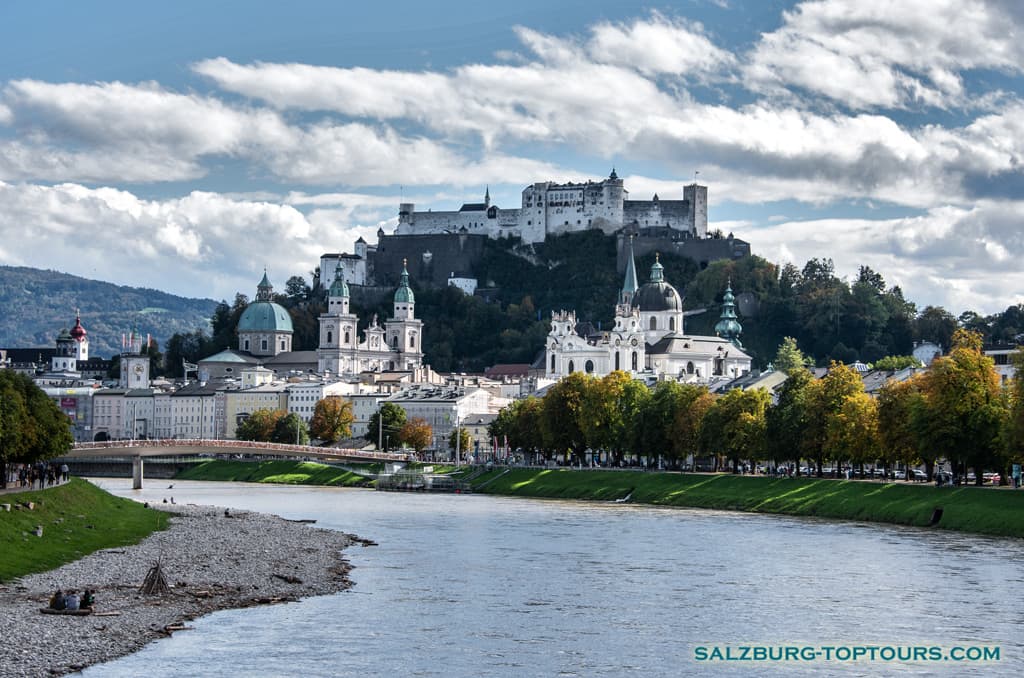 In the second half of October, the mountains are covered with a beautiful palette of colors. Snowcaps appear on the Alpine peaks. The sunny days of Indian summer end on October 20, after which leaden clouds cover Salzburg and the rainy season begins. 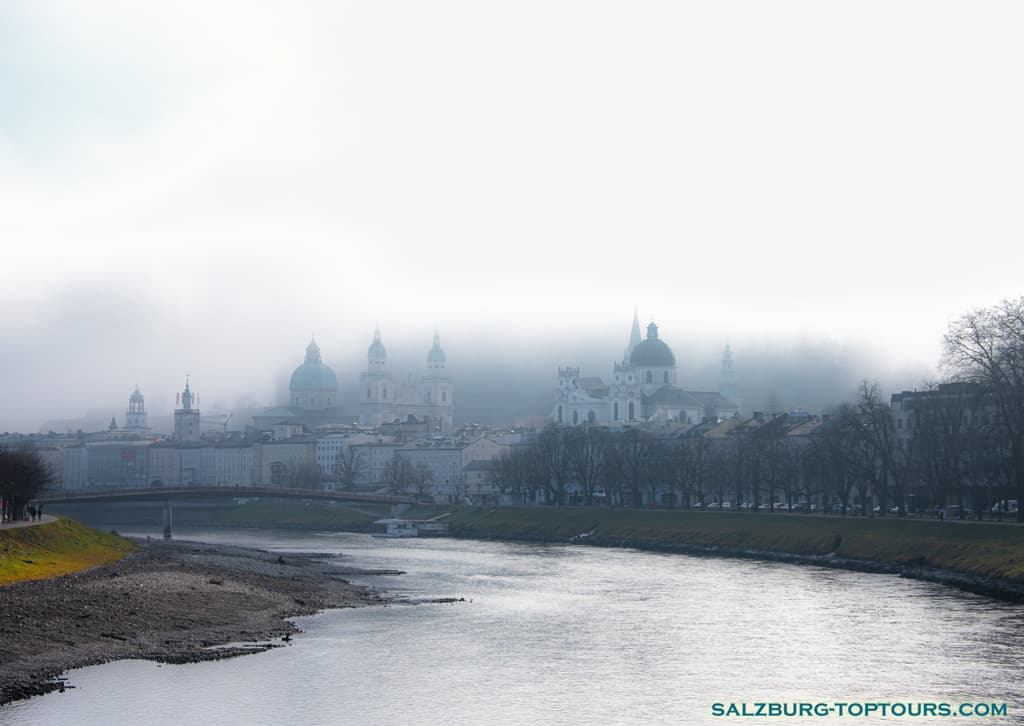 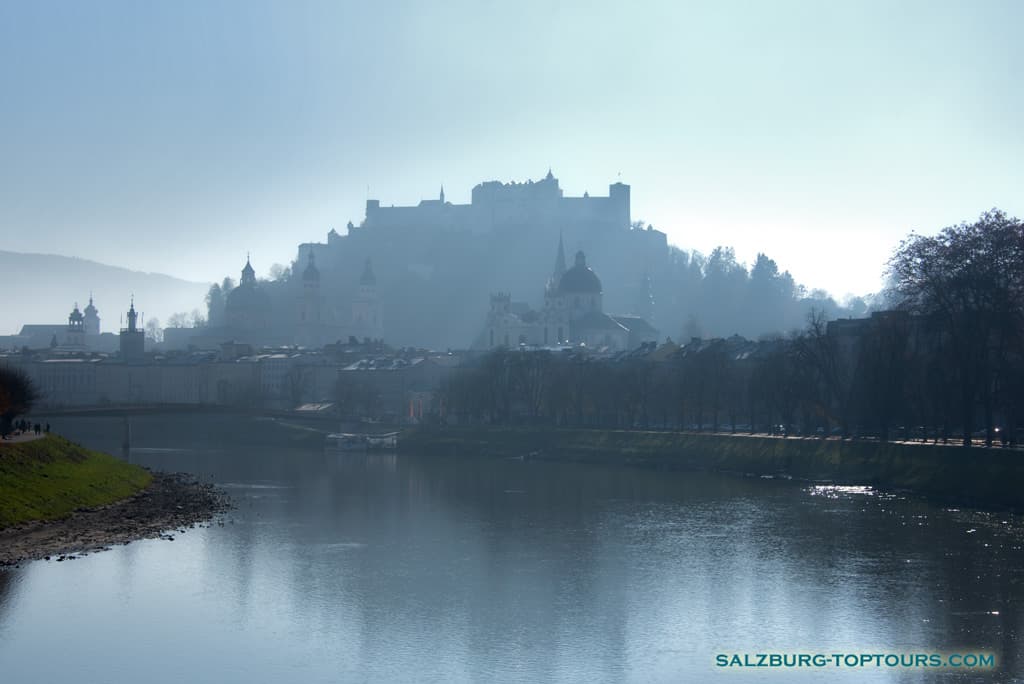